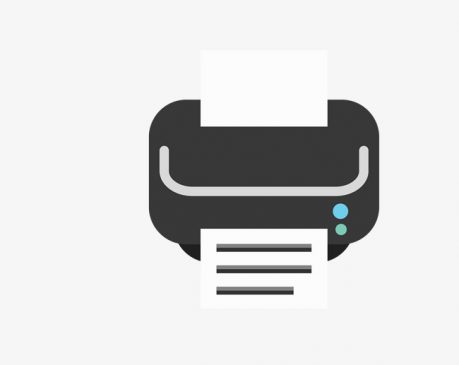 In computing, a printer is a peripheral device which makes a persistent human-readable representation of graphics or text on paper. The first computer printer designed was a mechanically driven apparatus by Charles Babbage for his difference engine in the 19th century; however, his mechanical printer design was not built until 2000. The first electronic printer was the EP-101, invented by Japanese company Epson and released in 1968. The first commercial printers generally used mechanisms from electric typewriters and Teletype machines. The demand for higher speed led to the development of new systems specifically for computer use. In the 1980s were daisy wheel systems similar to typewriters, line printers that produced similar output but at much higher speed, and dot matrix systems that could mix text and graphics but produced relatively low-quality output. The plotter was used for those requiring high quality line art like blueprints.

The introduction of the low-cost laser printer in 1984 with the first HP Laser Jet, and the addition of PostScript in next year’s Apple Laser Writer, set off a revolution in printing known as desktop publishing. Laser printers using PostScript mixed text and graphics, like dot-matrix printers, but at quality levels formerly available only from commercial typesetting systems. By 1990, most simple printing tasks like fliers and brochures were now created on personal computers and then laser printed; expensive offset printing systems were being dumped as scrap. The HP Deskjet of 1988 offered the same advantages as laser printer in terms of flexibility, but produced somewhat lower quality output (depending on the paper) from much less expensive mechanisms. Inkjet systems rapidly displaced dot matrix and daisy wheel printers from the market. By the 2000s high-quality printers of this sort had fallen under the $100 price point and became commonplace.

The rapid update of internet email through the 1990s and into the 2000s has largely displaced the need for printing as a means of moving documents, and a wide variety of reliable storage systems means that a “physical backup” is of little benefit today. Even the desire for printed output for “offline reading” while on mass transit or aircraft has been displaced by e-book readersand tablet computers. Today, traditional printers are being used more for special purposes, like printing photographs or artwork, and are no longer a must-have peripheral.

Starting around 2010, 3D printing became an area of intense interest, allowing the creation of physical objects with the same sort of effort as an early laser printer required to produce a brochure. These devices are in their earliest stages of development and have not yet become commonplace.

Personal printers are primarily designed to support individual users, and may be connected to only a single computer. These printers are designed for low-volume, short-turnaround print jobs, requiring minimal setup time to produce a hard copy of a given document. However, they are generally slow devices ranging from 6 to around 25 pages per minute (ppm), and the cost per page is relatively high. However, this is offset by the on-demand convenience. Some printers can print documents stored on memory cards or from digital cameras and scanners.

Networked or shared printers are “designed for high-volume, high-speed printing”. They are usually shared by many users on a network and can print at speeds of 45 to around 100 ppm.The Xerox 9700 could achieve 120 ppm.

A virtual printer is a piece of computer software whose user interface and API resembles that of a printer driver, but which is not connected with a physical computer printer. A virtual printer can be used to create a file which is an image of the data which would be printed, for archival purposes or as input to another program, for example to create a PDF or to transmit to another system or user.

A 3D printer is a device for making a three-dimensional object from a 3D model or other electronic data source through additive processes in which successive layers of material (including plastics, metals, food, cement, wood, and other materials) are laid down under computer control. It is called a printer by analogy with an inkjet printer which produces a two-dimensional document by a similar process of depositing a layer of ink on paper.